Phill beyond measure is mankind's greatest treasure.
Post Reply [phpBB Debug] PHP Warning: in file [ROOT]/vendor/twig/twig/lib/Twig/Extension/Core.php on line 1266: count(): Parameter must be an array or an object that implements Countable

6 posts [phpBB Debug] PHP Warning: in file [ROOT]/vendor/twig/twig/lib/Twig/Extension/Core.php on line 1266: count(): Parameter must be an array or an object that implements Countable
• Page 1 of 1

This is an interesting development. GW have already done a partwork subscription service before with Black Library books (for the Horus Heresy series). Now they're doing the same but for miniatures, building up two armies of models (Ultramarines and Death Guard) and a bunch of (industrial) scenery, as well as paints and brushes and various other bits. It's launching in just the UK at first (so you continental Europeans and global colonials get to see how it works out for us first).

The general model is to have a cheap first issue, and then a more expensive regular price, with subscription required so that you buy every issue. That's the case here too: £1.99 for issue 1, £4.99 for issue 2, and £7.99 for each issue thereafter. But it's a weekly periodical (or, strictly, four issues a month) so we're talking a standard monthly cost of £31.96. You can even go premium for +£1.50 per issue, so £37.96 per month, and get some extra accessories.

Is it worth it? There's an image of the complete set of armies and terrain (reproduced below), and it's spread across 80 issues. Here are the specifics for the first few issues: Plus if you subscribe within the first four issues, you also get one free issue and (spread out over the first seven deliveries) more free gifts: plastic glue (£4.30), clippers (£20), mouldline remover (£10.50), binder and dividers for the magazines, painting handle (£5), A2 poster of Space Marine chapters, large base brush (£5.25), small layer brush (£4.45), medium shade brush (£4.75). 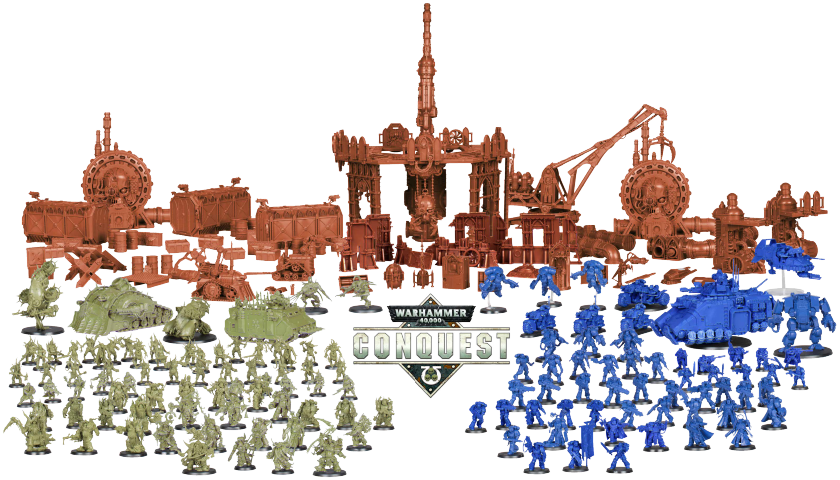 In the lists below (which are broadly from top to bottom, left to right), [DI] denotes models that are included in the £95 Dark Imperium boxed set...

The Death Guard models consist of: The Space Marines models consist of: The terrain models consist of: So looking at that range of models, we're talking a total spend of £622.21 in order to gain around £918.50 of models (broadly a third off the price) which is indeed overwhelmingly good value. And that's not including any of the paints and other accessories. The proviso on that being that you don't get any choice (short of terminating your contract at any point): you will get these two armies and all that scenery exactly as they are.

We shall see how this pans out in practice, but if you want to get into it then the earlier you subscribe the better (in terms of value for money).
Top

Strange how they kept the old marine kits in there and didnt stick with a far better pure primaris range.

For me, it'd be the scenery that id buy in for, but thats still a fair whack to shell out every months, especially if you had no interest in one of the factions.
Arse! Feck! Drink! Girls!
Top

Yes, it feels like quite a niche market to me.

Getting one of the boxed sets for Kill Team isn't bad at all: you're getting one extra team spare for a faction you're maybe not interested in. Fine. Doesn't take up much space and you can keep it as a little side project and let friends play with your team.

Getting one of the bigger boxed sets like Dark Imperium is a more substantial undertaking. There you're getting a spare functioning mini army. That's great if you split the cost and contents with a friend, or sell the additional unwanted faction on the secondary market.

But this is another scale entirely: a large army for two specific factions involving a correspondingly large investment of money. And due to its periodic delivery, it's more awkward to sell on the duplicates. And the timing is fixed: issue 1 comes out at the same time for everyone, and so on, so it's kind of now or never, and all the folks with duplicates will be listing them on eBay at the same time (driving down prices).

I fear that take-up will be low. GW piloted this already in the UK, so they must be sure. But still, it seems odd to me. I see the models are aimed squarely at the purchasers of Dark Imperium (bolster the two factions you already own) but it also duplicates those models which for HQ models in particular isn't useful.

Having said that, it's tempting to get issue 1 solely for the cheap paint, then chop up the Primaris Space Marines for decorative casualties on bases.

"Games Workshop have created a brand-new Space Marine army for this collection. The Silver Templars will have their own unique colour schemes, armour markings and history which will be developed and expanded with each new issue. There is also an exclusive new miniature included with Issue 05."

Hmmm, this rather looks to attend another target audience, if you ask me.
They might rather reach out to the other market of general modellers who buy those ships, cars and what not in abonnement. It's quite popular in Germany - if I remeber correctly. They don't have a large run. Only a few couple thousands. If it's larger than 10.000 it's cost "efficient" so GW might have borrowed that and just sell the single pieces they already have laying around.

Also it looks to me like another approach to get people into the hobby and keep them doing it over time, instead of selling large armies and units at once. Like they tend to do in their stores, you get to do it step-by-step.

IMO this is not aimed at the hardcore hobbyist we are, who already own a butt-load of stuff. The offer is nice, but looking at it I almost own any DG model of that list above. Plus I have more than enough paints and brushes. So even with 30% off It's not itching.

6 posts [phpBB Debug] PHP Warning: in file [ROOT]/vendor/twig/twig/lib/Twig/Extension/Core.php on line 1266: count(): Parameter must be an array or an object that implements Countable
• Page 1 of 1