stuff. That model looks fairly complicated. Maybe not the level of the old forgewold Titans, I looked at the assembly guide they had on the website and when they started talking about cutting piston shafts to length to match the pose I got intimidated and didn’t buy one when I could afford it.

Where are you going in South Korea? I was over there 20 years ago around the Pohang area. Be careful with the Soju. We were told it had embalming fluid as one of it's ingredients. I don’t know if it’s true but I saw hardcore heavy drinkers get their dicks knocked in the dirt by it. I’ve never seen people that drunk (except maybe once on Rakki)! Tell us about the trip, I’d like to compare impressions but I don’t want to influence your experience.

I got me some of the nice Revell Samurai Figs years ago, when I tried to paint them, they got totaly bristle and fell appart, that was the last time i worked with bendy plastic. Since Flames of War / Battlefront is changing all their infantry to this stuff I am bit worried, also when it comes to detail depth.

Soft plastic? I wonder why they switched to that material, seems a bit silly considering all their other stuff is in nice hard plastics?

Reaper Bones minis are REALLY soft plastic (But I guess they are extremely cheap for a reason.) that only really shines in their larger models. Otherwise on the regular sized minis detail is soft as bollocks and swords/spears/etc tend to be curved irreparably.

Oi! Sooo much stuff catching up on. All this is super lovely! I’m going to be excited to see the possible legs as I’ve always wanted to build a knight but didn’t like the mono pose and like you been too chicken to pay for a kit an chop up the legs to possibly ruin it.

Just to Seoul (in fact, Gangnam this time). I'm working with a client who is an insurer, making sure that their cashflow projection model is developed appropriately to cope with upcoming local and global regulatory reporting changes.

But it's not just actuarial models that I work with (he said, with a smooth segue). Recent progress includes: 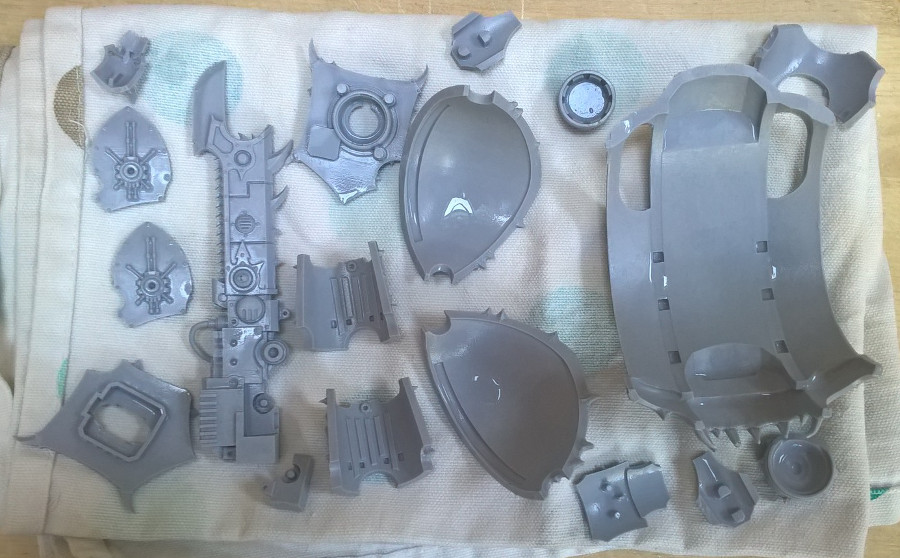 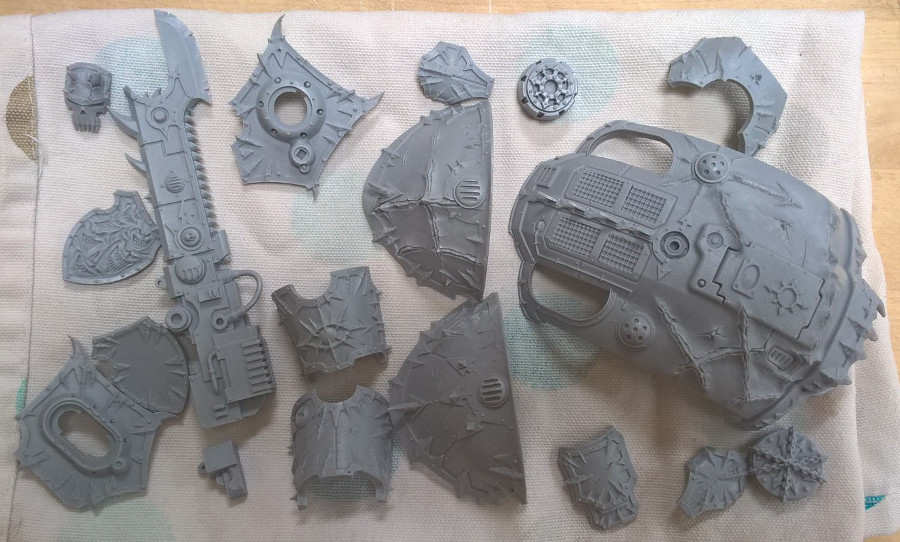 I'm really enthused by the knight model, and I'm keen to keep building it. But the base I ordered hasn't arrived yet (still stuck with the manufacturer as far as I can tell). But in the meantime I've got some other bits to work on tonight. I'll post more either tonight or tomorrow morning.
Top

So you are back from South Korea or haven’t left yet?

The model looks amazing so far! Don’t drop it once you’ve assembled it . . .

So you are back from South Korea or haven’t left yet?

For this one client, I was there for a week in Spring, a week in June, I'm going there again for a week in July (in one week's time), and finally for three more days in October. So never long enough to get over the jet lag.

Tonight I've been cleaning up and scrubbing the components for the two Nurgle dreadnoughts from Forge World. No pics as they're just sitting in a tub of soapy water now. My plan is to mix and match the pieces; in particular to swap some weapons around. The two ranged arms are twin lascannon and twin bolter, and the two melee arms are chainfist and fist. In practice those don't fit with new datasheets without doing weapons swaps: a Helbrute can't have a chainfist, and a Hellforged Contemptor Dreadnought can't have a twin lascannon. So the model builds will be:Also neither of them get the option for smoke launchers any more, so it's tempting to keep the smoke launcher components to fit onto vehicles (Rhino, Predator, Vindicator, Defiler) instead. On the smooth spot on the back of the 1st dreadnought's carapace, I can mount another banner.


So what else have I been working on? I promised more last weekend but failed to write it up. Well, what I was working on was cleaning up the poseable Knight legs (while waiting for the base to be posted). Here is what you get: 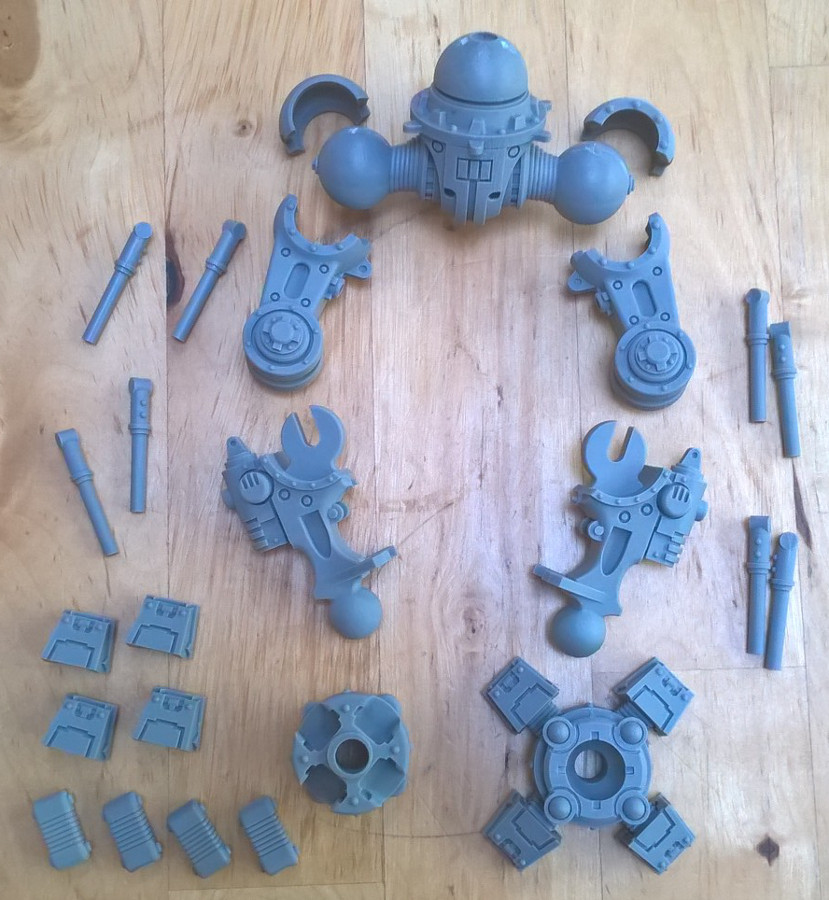 That's 33 resin components. The foot on the right shows how the toes fit on, while on the left you see the separated components. More pictures are available on the Soul Dark product page.

I read that the design was developed by Shane Blomburg, known as Comradequiche on Shapeways. His pieces are very well put together. From a Nurgle point of view, you may be interested in his Death Guardian and Plague Mask Knight heads. It appears that he sold the legs design to Soul Dark and that that therefore they are the only people you can buy it from.

An advantage of 3d-printed pieces is that there are no casting flaws: mould lines, flash, pipes, and so on. But a disadvantage is that the surface texture can lack a complete smoothness if the material is not fine enough.

In practice this piece has the worst of both worlds. The surface texture is noticeably rough, to the extent that it will probably show up as textured when painting. But worse still is that Soul Dark have then casted the pieces in resin, so that there are additional flaws through slightly misaligned moulds.

The problems here lie with Soul Dark, not with Shane Blomburg. They should have used the finest possible finish before casting. (And had no mould lines due to misalignment.)

I think it's not so bad that it's not salvageable. In particular, a large saving grace is that these legs are the skeleton over which the armour plates will sit, and those armour plates are the Forge World pieces pictured above. But it's good to know about these flaws in advance in case you're thinking of going down the same route. I'm definitely glad I've got them (as the GW legs are painfully monopose) but I'd be wary of other clearly-3D-print-designed pieces coming from resin producers.
Top

That’s one of the issues I’ve had with printed stuff. I’ve seen some that had so many little ridges it turned into a disaster when hit with a wash. I’m looking forward to seeing the progress on this stuff.

In the continued absence of a base for the Knight, I've moved on to other models in the list that I need to build. And this week, it's the Hebrute's turn.

Over the weekend, I cleaned up all of the parts: 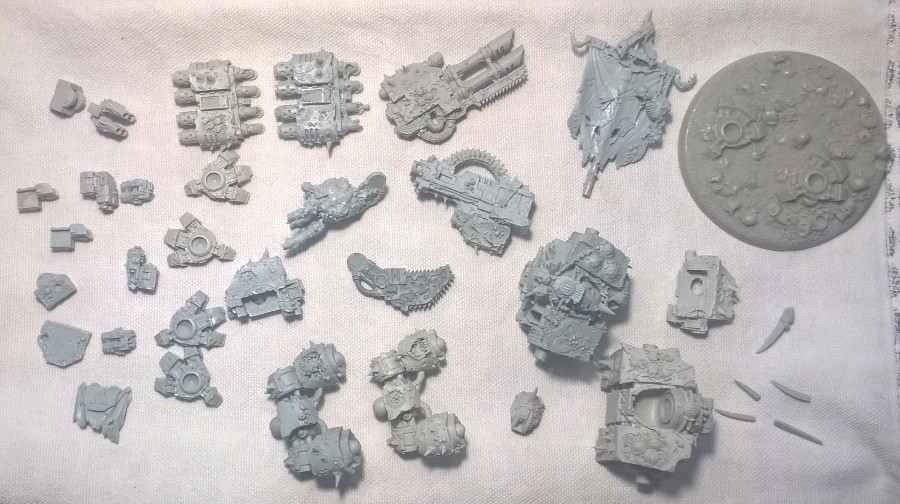 What we've got there are both of the two Nurgle Dreadnoughts that Forge World produced, as well as the Forge World Dreadnought base. All of these are long out of production now. And that's a real shame, as these are superbly well-detailed.

The four slivers over on the right are the talons for the power claw. Just above them is the only breakage: this is the bayonet attachment from the heavy bolter which sadly came off at some point (I don't remember if it was like this when I received it, or it has broken while in storage). In practice this part is too short and thin to reasonably be able to pin back into place, so I'm going to leave it off (it would be too weak using just glue). That makes the model lose a little depth; perhaps I'll find some kind of melee weapon fitting from another model at some point. But I'm not letting that bayonet go to waste - it's going to become the plaguesword of my Spoilpox Scrivener (converted from the old Plague Elemental model). 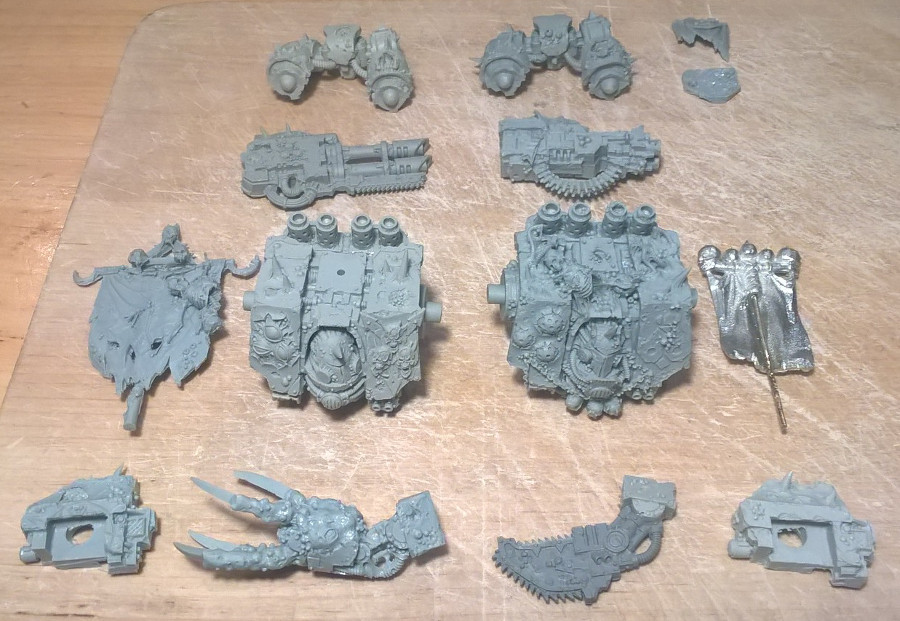 On Tuesday I found the time to begin construction. The bodies now have their exhaust vents, targeters, and combi-bolters stuck on. And the melee arms are complete up to the hinges.

Given the parts from two models, as I said in an earlier post above, I'm mixing and matching the weapons. I've also decided to move the banner from the second model to the first, and then add a new banner to the second. My primary motivator here is that the Helforged Contemptor Dreadnought is going to be called Δολοφόνος (Greek for "murderer") and this lends itself well to a banner that reads:

...which I think makes a pleasing pattern. But the resin banner doesn't have the free space for that as its taken up with a large fly symbol. So I've used the old metal Wight King battle standard instead here, fashioning a pole from a thick paper clip, which I'll thicken further with glue to form a textured surface. The skulls on the banner will nicely complement the skulls on the Forge World base.

I'll have to start painting before I stick on the arms. I think I can get away with attaching everything else before gluing; or should I paint the torso before sticking it to the legs?
Top

Good progress. Yesterday I put together some more components: feet on the base, melee weapons onto shoulders, and banners on carapaces. The banners are both pinned on. The resin banner pole is noticeably weak: it's the wobbliest part of the model, so I'll have to look after it to make sure it doesn't snap. 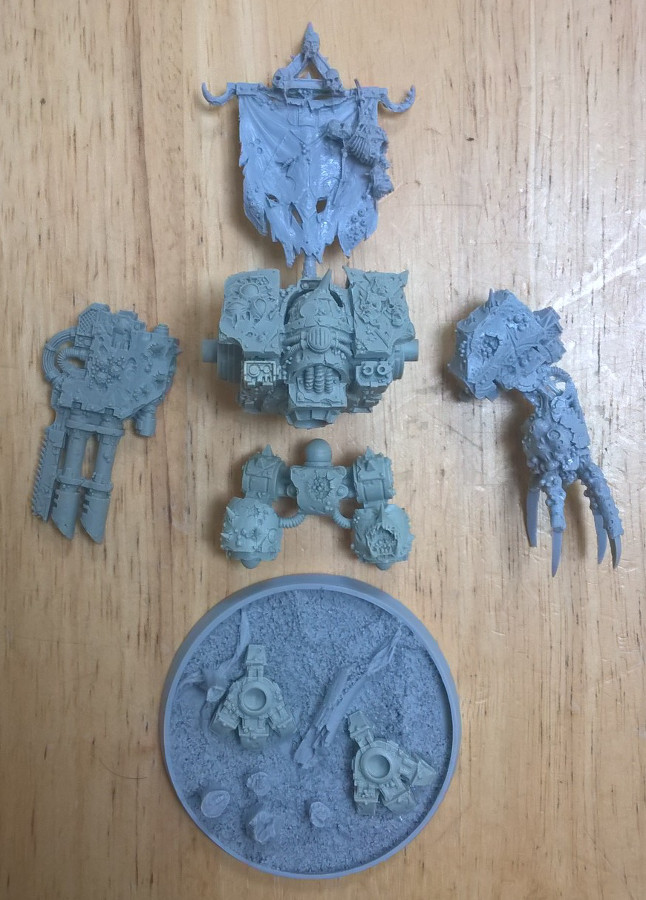 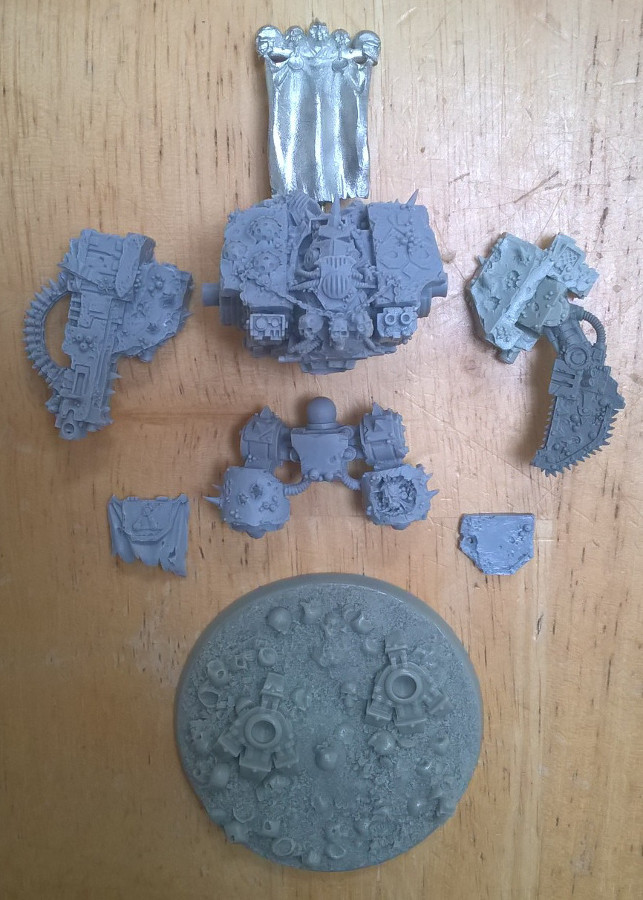 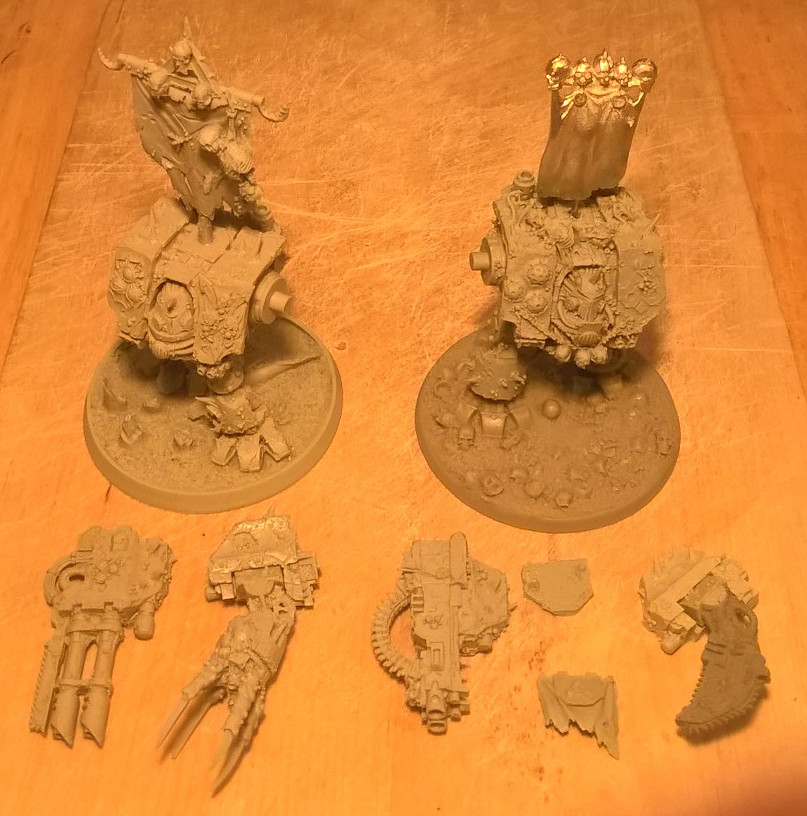 That's the two dreadnoughts now fully assembled prior to painting. The arms will have to go on after I've started painting, as will the armour plates on the Helforged Contemptor (those extra bits in the photo - the cloth goes over the groin, and the plate goes over the arse). There are pins at the ankles, the waists, and where the banner poles connect to the carapaces.

Stopping there for a while, then, I've also scrubbed the resin components for the Rhino and left them to soak overnight.

And I've also started on the Chaos Lord. Here are the components: 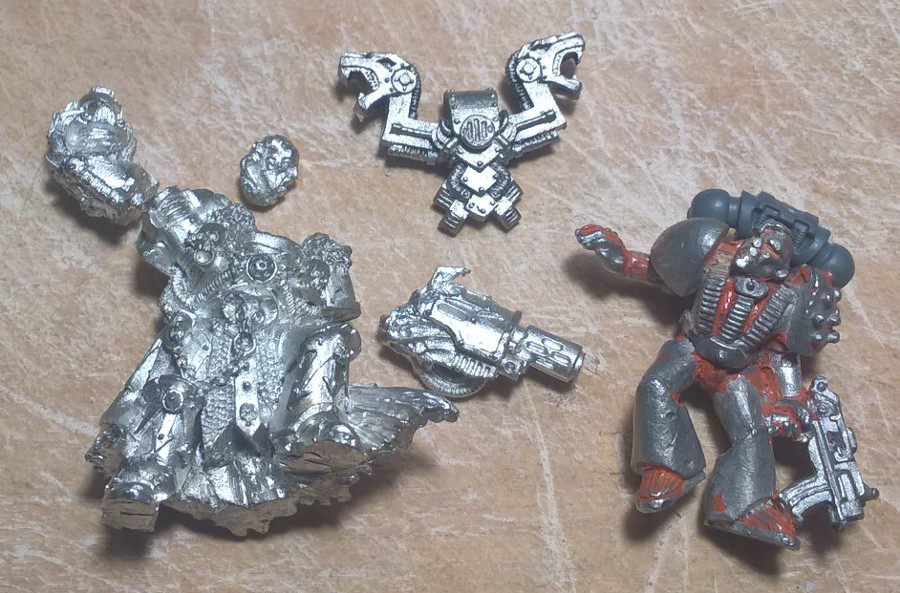 That's the old metal Chaos Lord model, with the combi-melta (as opposed to plasma pistol) and power fist (as opposed to power axe), and the unhelmeted head as the helmet is a bit generic-Chaos while the bare head has a trio of studs that can be painted as Nurglesque boils.

The backpack is from the old metal Chaos Sorcerer.

I've cut off the silly topknot of hair to leave him bald. I've also cut away the scenic basing from under the feet. Why do that latter edit? Because of the bloke on the right. That's a very old Space Marine casualty, and I'll be modelling the Chaos Lord standing on the Space Marine, with the combi-melta pointing right into his doomed face, and the power fist turned so that the Space Marine's helmet is facing him.

Combi-melta barrels have been drilled. 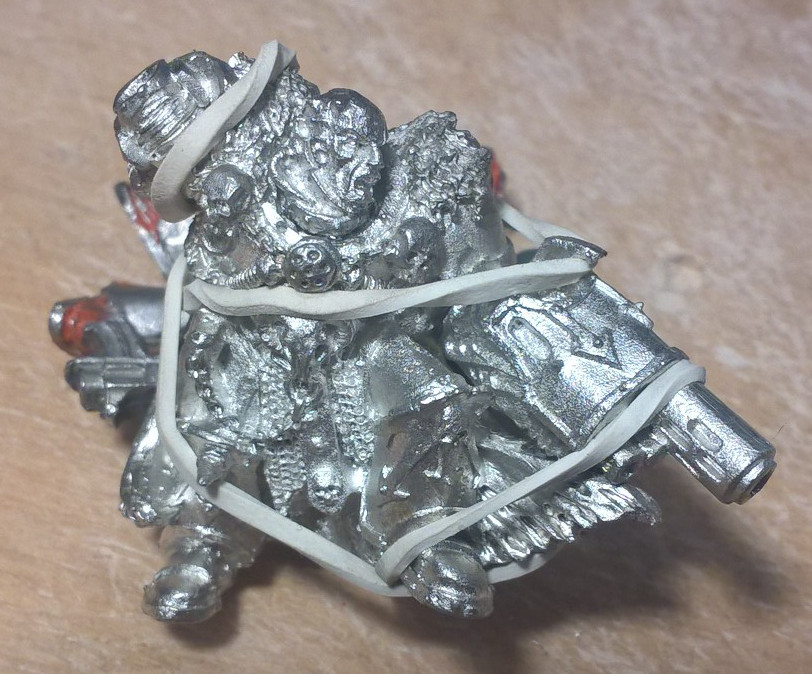 And construction has begun here as well. The combi-melta is pinned and glued (supported here by an amusing elastic band). The head is simply glued.

I don't think I'll get anything more done now for a while, as my next flight is on Saturday. I'll be back in a week! (But too shattered from jet lag to do much modelling, I expect.)
Top
Post Reply [phpBB Debug] PHP Warning: in file [ROOT]/vendor/twig/twig/lib/Twig/Extension/Core.php on line 1266: count(): Parameter must be an array or an object that implements Countable

Users browsing this forum: No registered users and 2 guests