Yesterday I experimentally tried sawing off a section of the plastic GW legs to get the joint casing, to see if I could practically use it to cover the gap I've left at the hips by putting the legs on the wrong way around. Here's an example of the bit I cut out (without having taken the effort of cutting out the centre section yet): 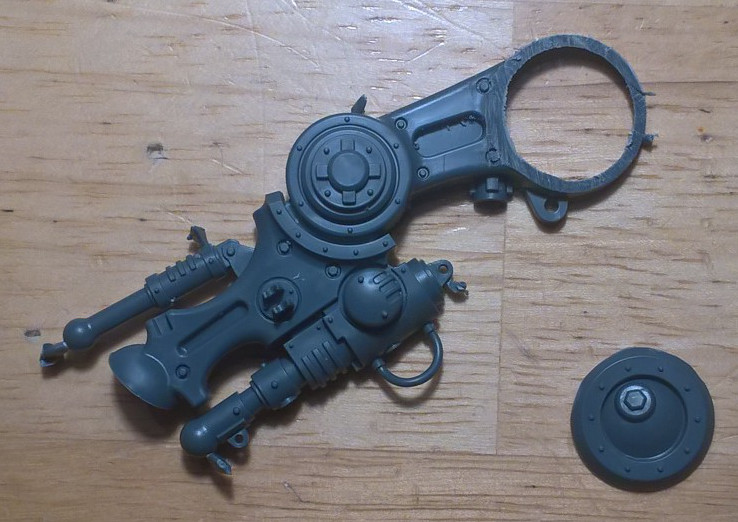 In practice it looks worse with that on it than it does as is, so I'll not bother patching the gap with any component. Instead, if I think it needs covering, I'll add oozing slime or (more likely) corrosion to the offending area when I come to painting it.

So I continued on and finished off both arms, as well as a few more bits around the torso and legs: 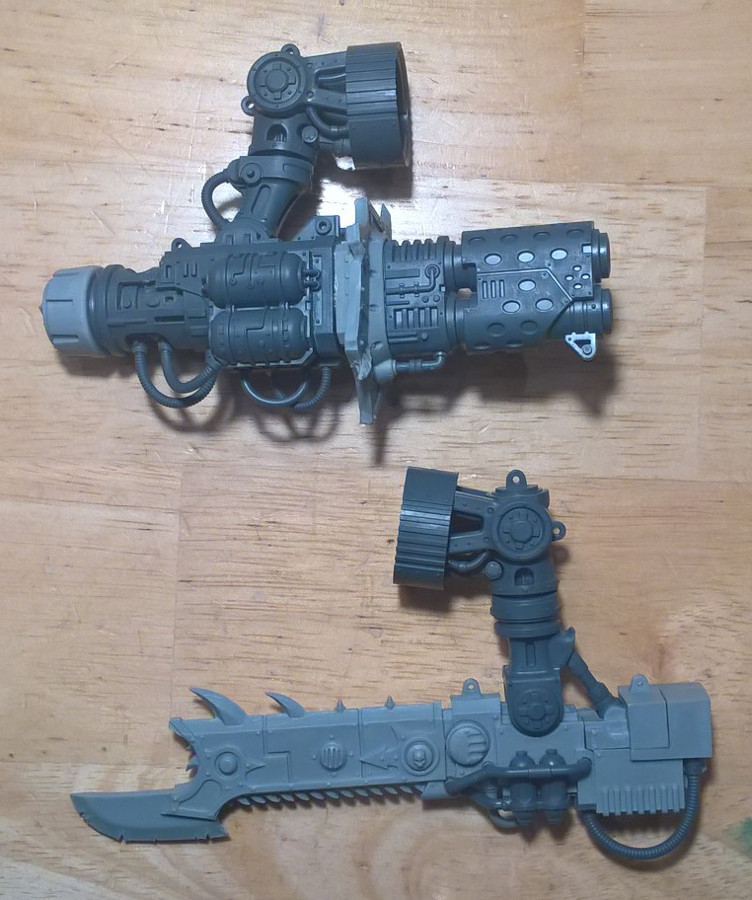 Here's a dry fit with the body just balanced on the legs for now, and the armour plates missing: 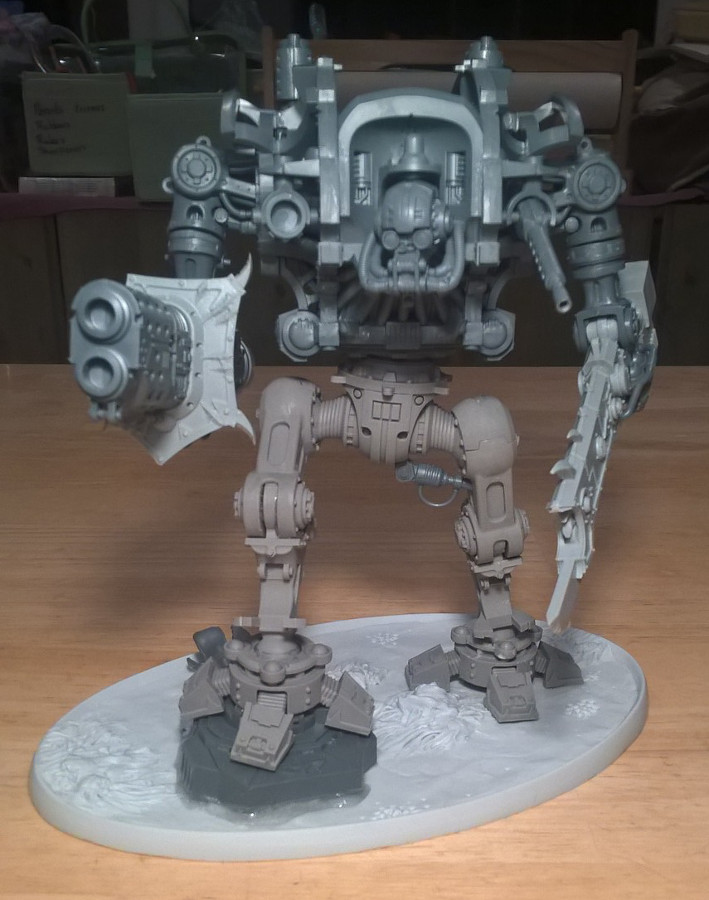 Snagging jobs left to complete: Then I need to paint the superstructure and the armour plates separately before the very final assembly is complete.

I'm having an early night tonight, and I'm out role-playing tomorrow, so that's me done until Thursday evening.
Top

Sounds awfully fiddly mate but I think it'll be superb once you manage to get through all these tricky parts!

All I got done last night were the butt danglies (that's a technical term): 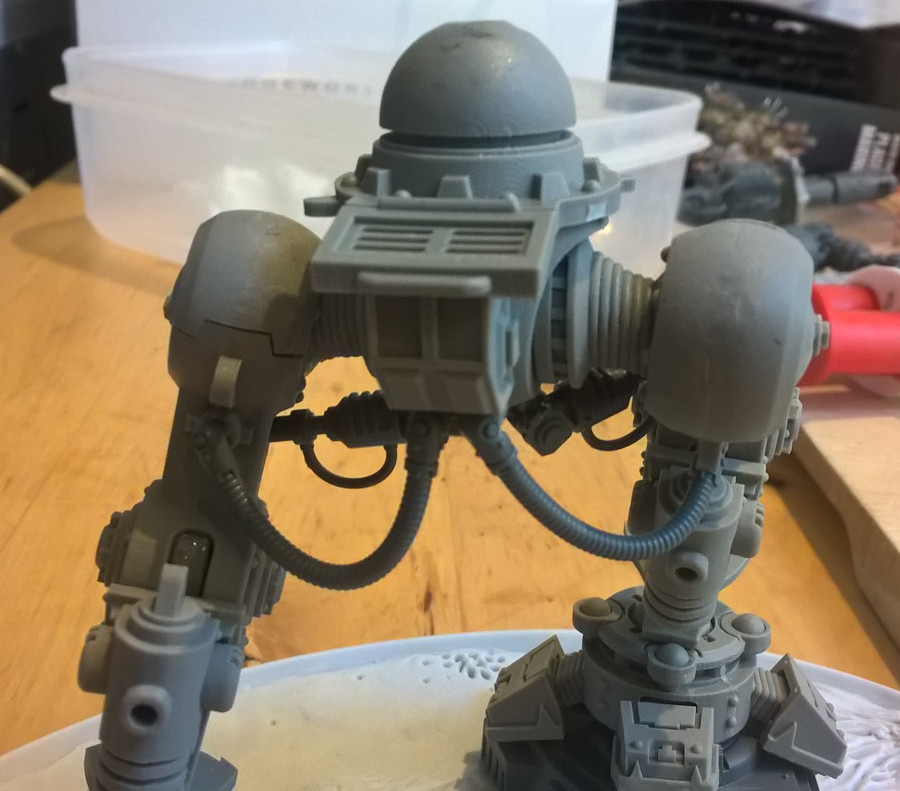 Just those four components took the whole evening to do, in terms of fitting, measuring, cutting and carving, bending, and gluing. The gluing was the worst as these are too small and awkward to pin, but don't fit smoothly (since they're made to go on the plastic legs at different angles) so I had to individually hold them one at a time until the glue had set.

Yes, one of them was pictured attached in the post above. But it fell off so I had to do all four in one evening.

Slow, but now that it's done also effective. I feared that I'd have to fashion scratch built pipes, but as you see I got the existing bits to fit quite nicely.
Top

The Knight's legs are finished! Yesterday I added all eight pistons (four for each foot, individually cut to length), the cables at the backs of the legs (carefully trimmed from the GW plastic legs), the bit of the waist piece that broke off in transit from Russia, and a panel at the back that I carved out from the plastic kit (because it looks better than the 3D-printed blocky design). Here are pics! 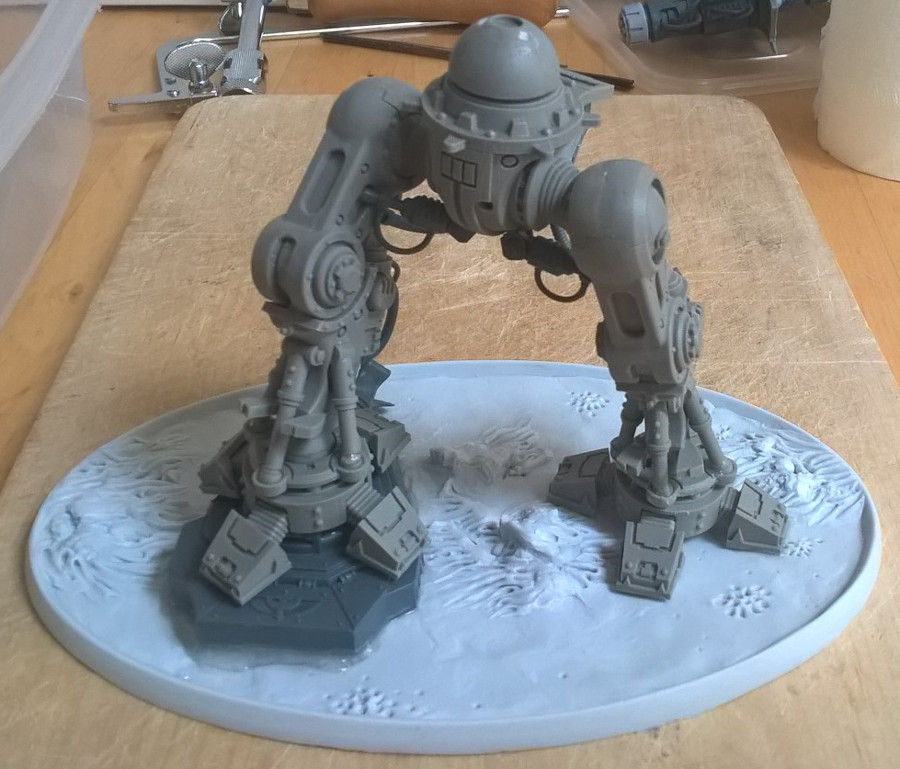 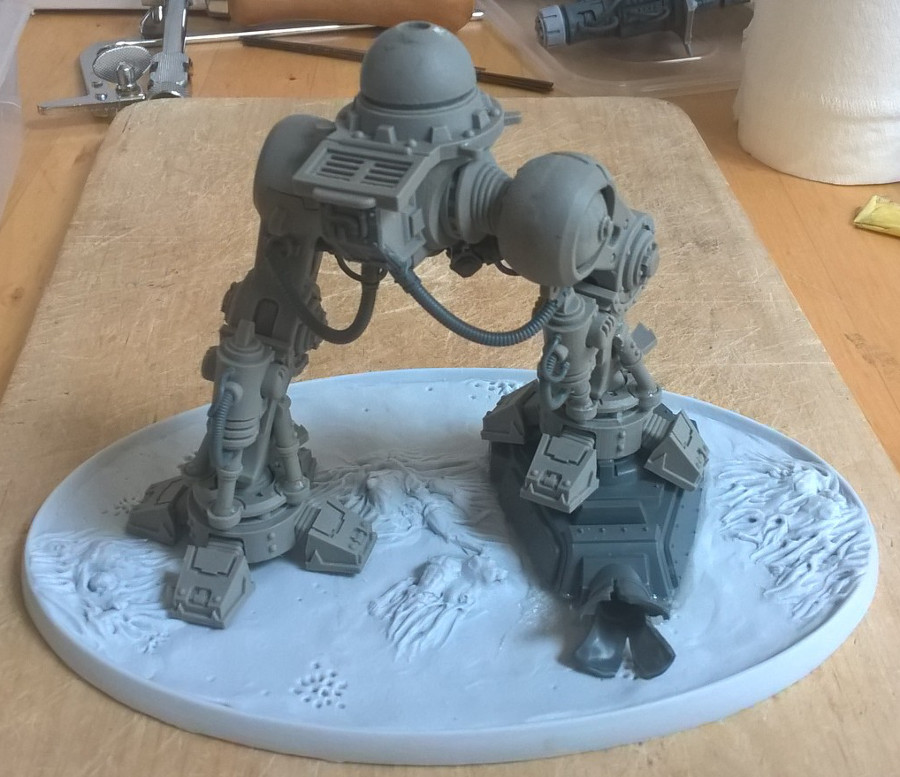 And a close-up of one of the legs, for the detail of the cabling: 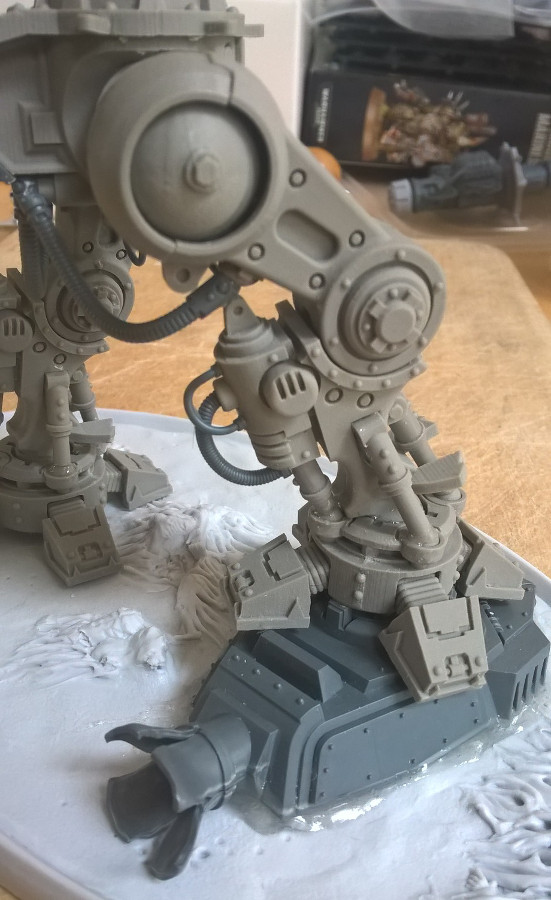 A productive weekend! Yesterday, having finished the Knight's legs, I stuck the body on: 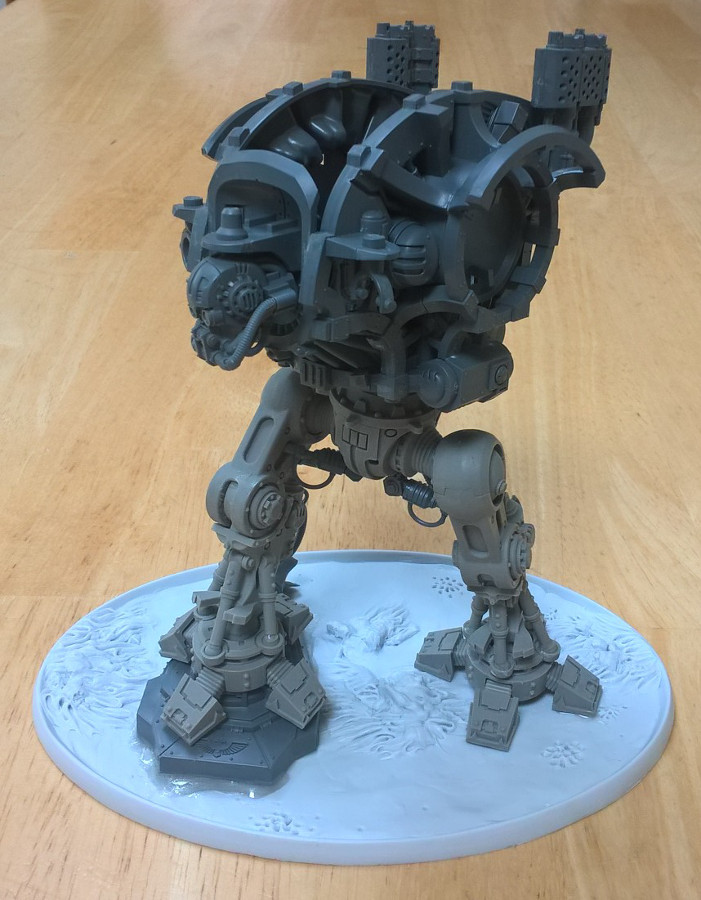 That's held on with two pins at different angles, so it's a great sturdy bond. There is no more assembly to do for the Knight before painting. Just some filler needed (especially on the hip joints) to fill in some gaps between individual components.


I also put together the fifth and final Plague Marine member of the Death Guard kill team (two Poxwalkers still to go): 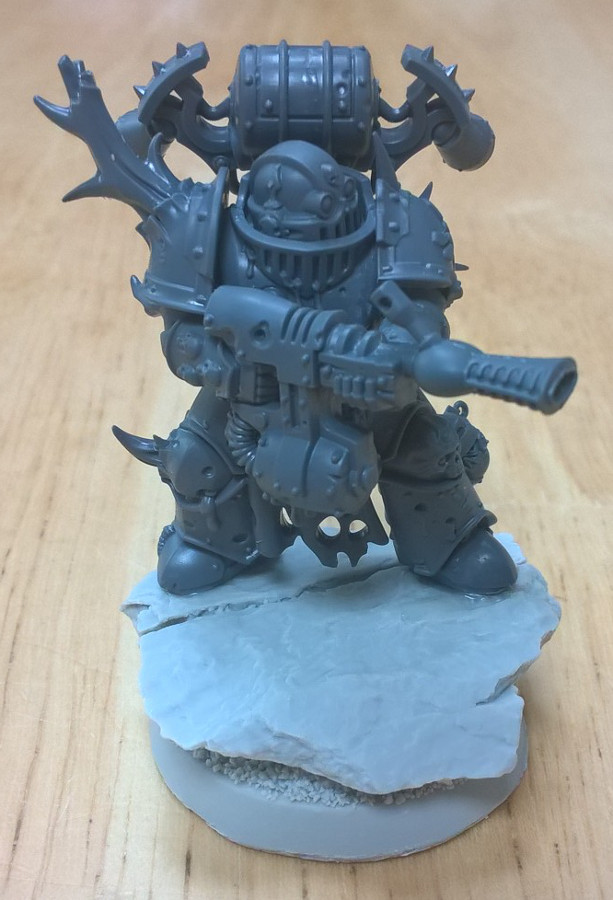 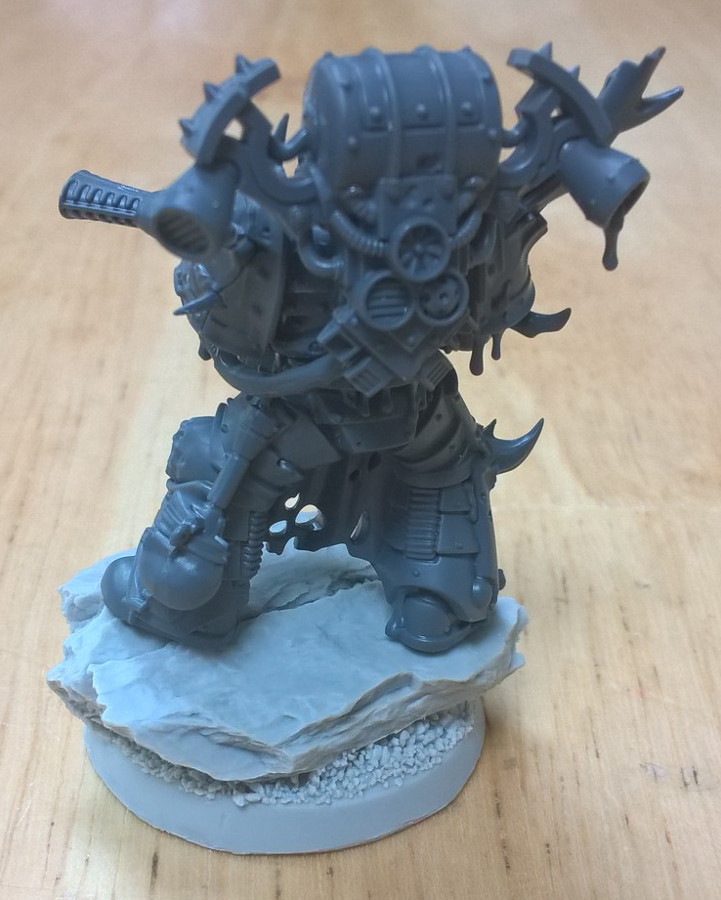 The Plague Belcher has a barrel with an ellipse-shaped cross-section, so I couldn't drill it out. Instead I carved it out using a craft knife before sticking the two halves of the barrel together.


And finally there's this guy:

I just wanted a Space Marine having a cool time, relaxing in the Garden of Nurgle. 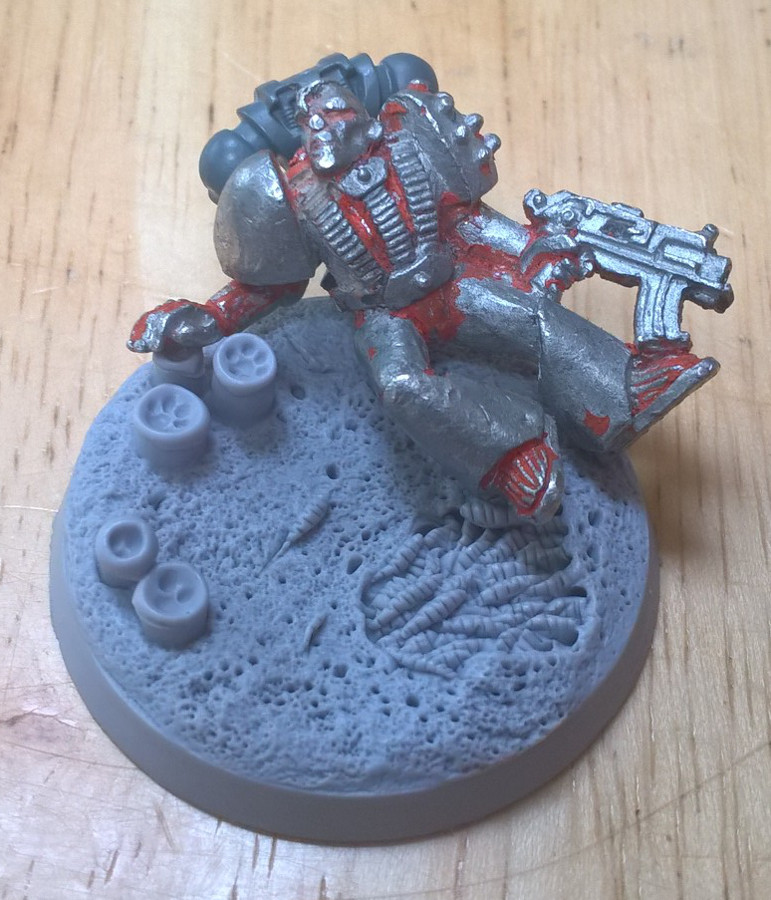 Nah, he's a scenic base for my Chaos Lord. You'll see him in position in the my post (because I've already completed that work today)...
Top

DG - is that from the regular kit or one of the easybuild ones? Like him regardless.

From this box of seven Plague Marines. There are lots of weapon options in there. I assumed that the body parts would be swappable, but actually the components only go together in one way unless you convert them. So really it's more that you have seven independent models, each of which has at least two weapons configurations. Still, plenty of spares (heads and bellies, as well as weapons) for me to use to tart up other Chaos Space Marine models. And the detail on these guys is absolutely superb; I think the best Plague Marines ever in my opinion.


So what did I get done yesterday?

Well, the Chaos Lord now has his power fist pinned on and his backpack glued on. I've set a pin into the base, and this is what the whole thing looks like when assembled: 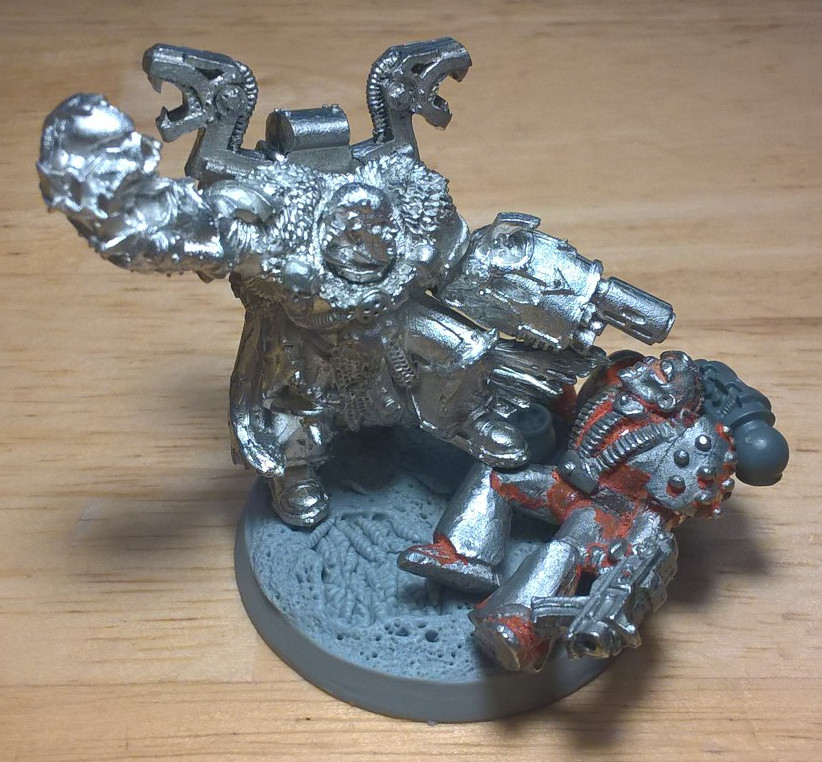 The Chaos Lord isn't glued on, so that I can paint him separately from Melty McMeltface (who will be a Novamarine, by the way - easier then to pick out that his armour pattern matches the helmet in the power fist). I've also drilled and cratered a hole into Melty's left arm to explain why he can't use his lead bolter.

The diorama as a whole is a commentary on how white metal killed off lead models, of course.

Also I fixed a piece of terrain that broke at our last game: 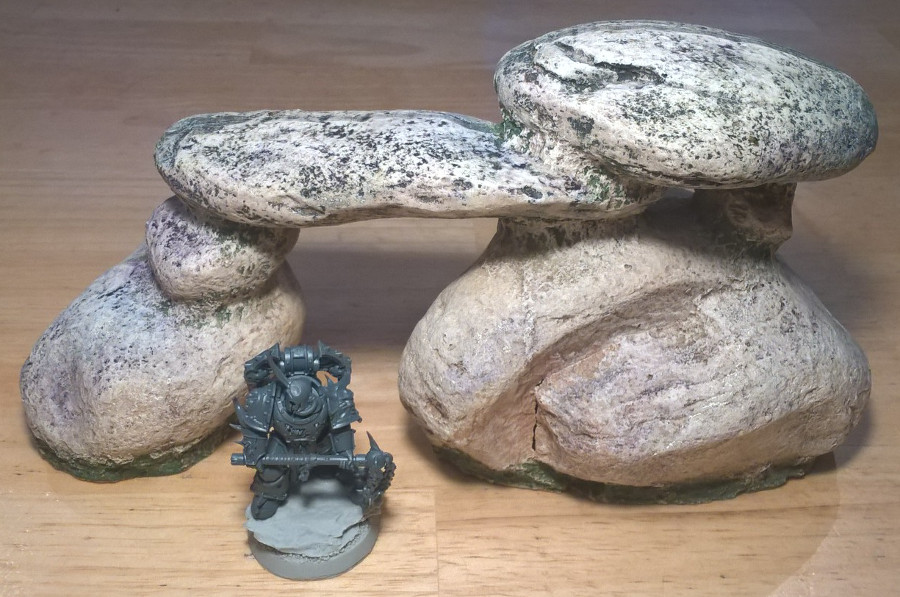 That's actually a fish tank decoration that I deliberately chose to be reusable for wargaming when no longer needed for the fish. Plague Marine for scale.


And finally, two Poxwalkers assembled and pinned to bases, which completes the Death Guard kill team: 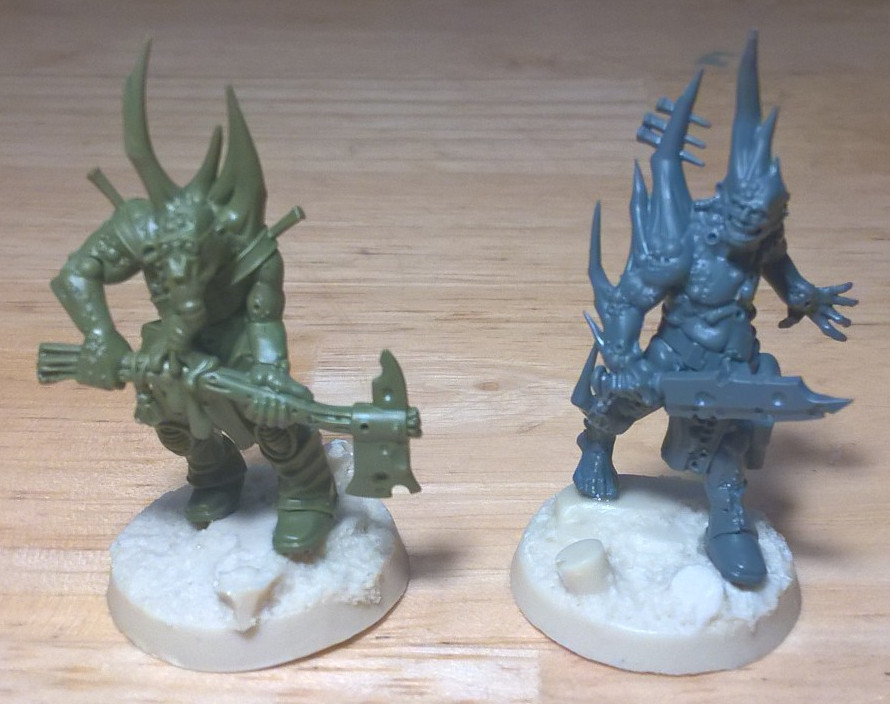 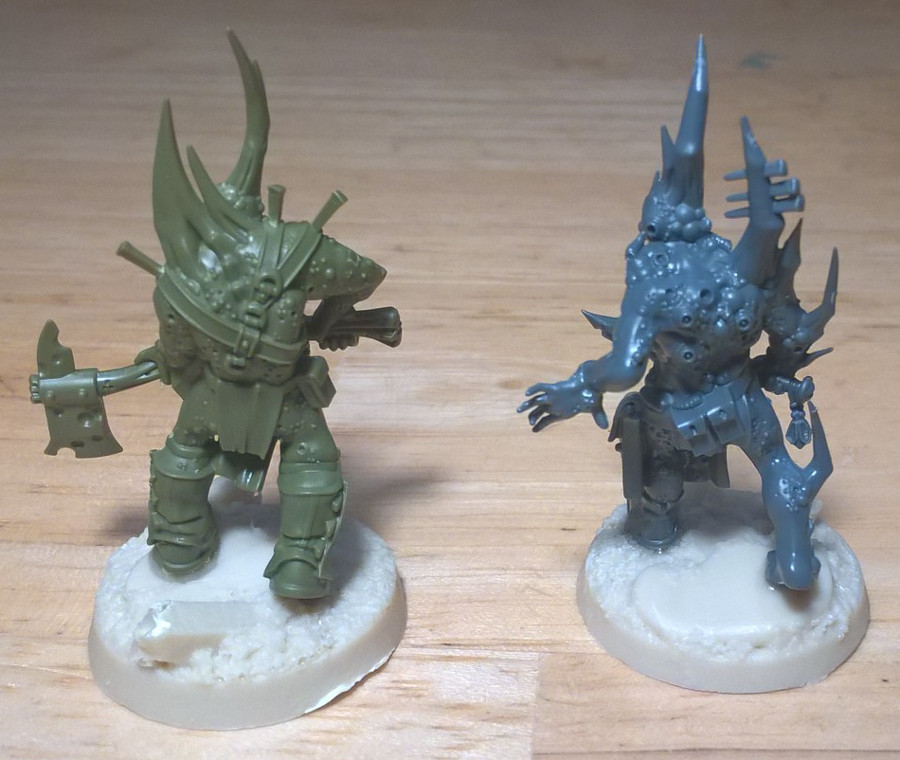 I'm now off to Norway for the week to work on-site with a client, so no more progress to be made until the weekend. But I'm in a great position, with only the following jobs yet to do: And then I should be able to start painting.

I want to try a couple of test models (particularly to practise using sprays, which are a dark art to me). Then the priority is to base coat the Knight and Dreadnoughts so that I can stick their arms (and, in the case of the Knight, armour) on.
Top

That’s a whole lotta work you’ve done. It all looks great though.

I'm back at it after a week in Norway. But I've now also only got less than a week to go before the game.

Just a short night's work tonight given other commitments, but I did do the last model that hadn't as yet been started: the Malignant Plaguecaster. 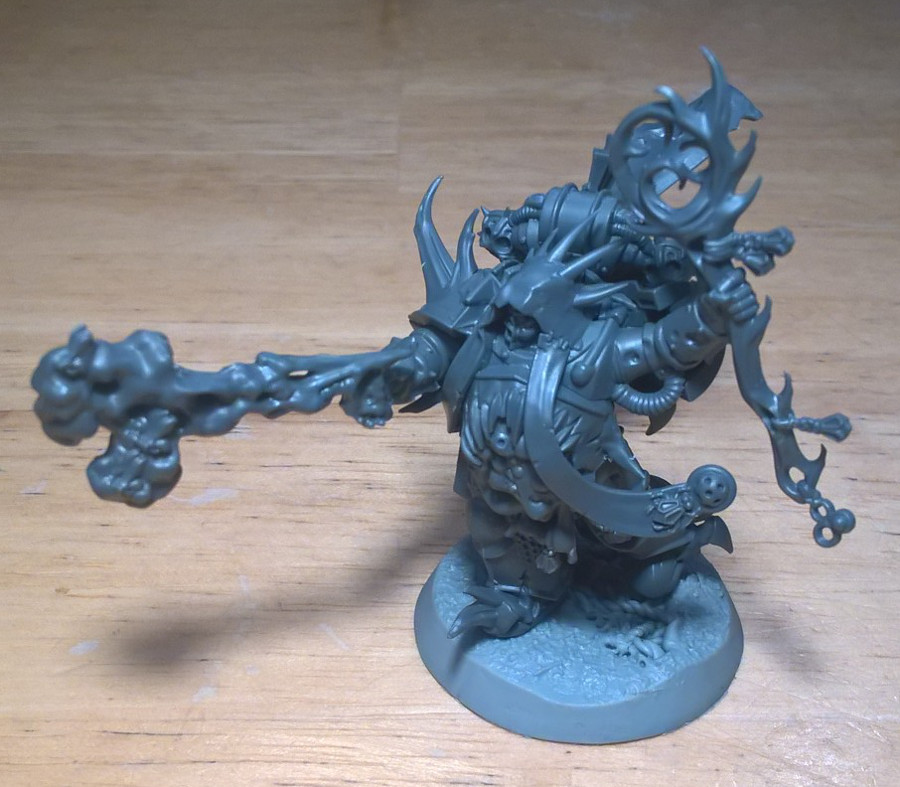 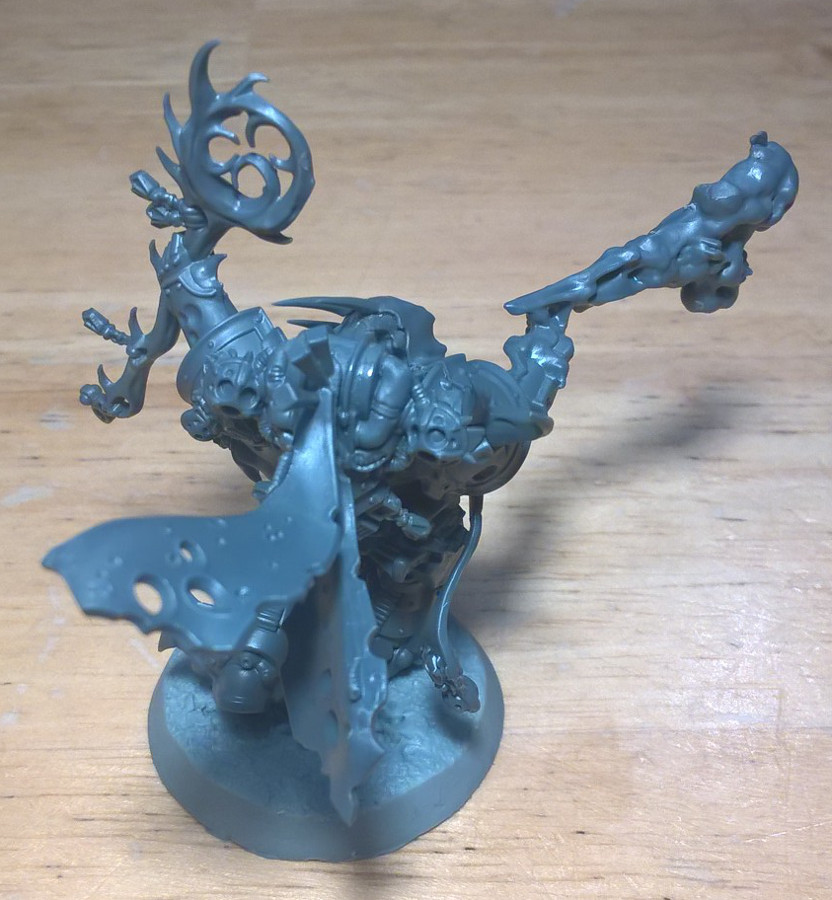 It's an impressively intricate model, which my mere two photos don't do justice. It's definitely one to look at the full 360 degree images for here. In this case just a bit too intricate as one of the three trailing strips of cloth had snapped off on the sprue (probably my fault from transit), but I managed to successfully glue it back on; that'll just be perpetually fragile and I'll have to just be careful with it.

It's such a busy model that I've made sure to use a base with no height to it, to prevent visual clashes.

So now that's all six of Max's models ready to go, my Nurgle Daemons are already done, and I've got two kill teams prepared (Tyranids for Max, Death Guard for me).

My next priority is to do the conversion of the Mabrothrax / Plague Elemental into a Spoilpox Scrivener, before the weekend.
Top

Top
Post Reply [phpBB Debug] PHP Warning: in file [ROOT]/vendor/twig/twig/lib/Twig/Extension/Core.php on line 1266: count(): Parameter must be an array or an object that implements Countable