Awesome effort sir, keep it up!

Last night before the game, so just some tidying up to do.

My daughter accidentally knocked the Plague Drone that was left out from last night to set, and broke off the rider's sword hand. This is the weakest bond on the model, so it's not a surprise. So I've re-glued that. Ideally it should be pinned, but the pieces are designed with a dogleg-ish join to make it stronger to glue them as is, and this gets in the way of pinning as it's tricky to drill a straight line through that small join. If it falls apart again, I'll consider a more robust approach at that point. 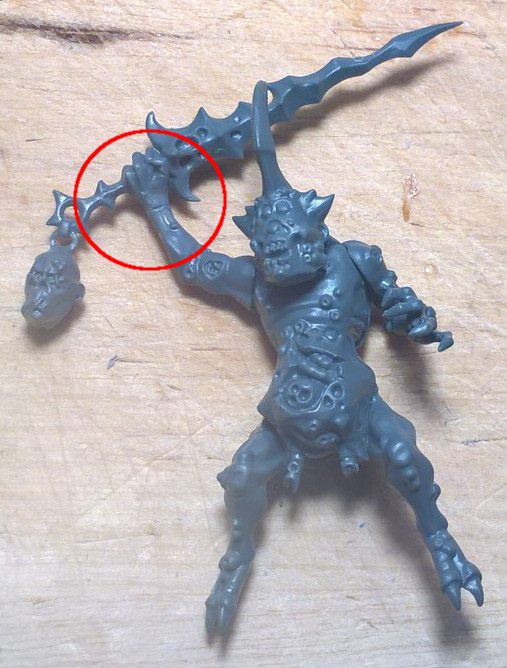 I broke another component myself. When posing the tentacles for the 2nd release Beast, the tall one at the back snapped off. So I bent it to the shape I wanted, and then pinned and glued it back into place. I drilled quite far (and carefully) into both sides of the join to make sure that it's strong. 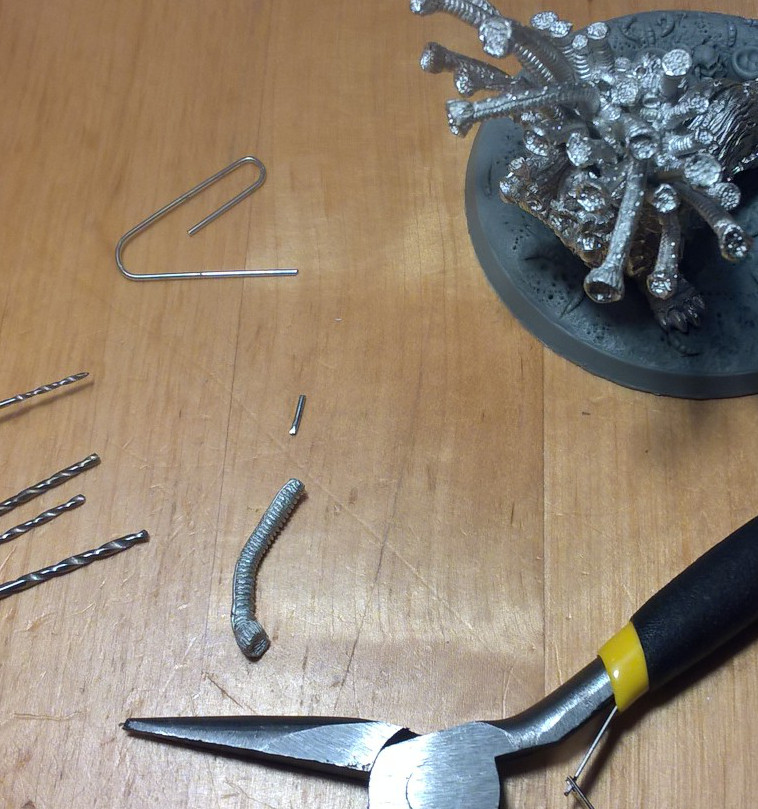 And the Nurglings! Here's a pre-assembly view of them. 50 there, so I left out the painted one (which I hadn't spotted when stripping the others). (Actually there's an error there too: the last of the Carnival of Chaos models is actually the Nurgle Familiar model. The last CoC Nurgling hid in a bag and I didn't spot it until after I'd assembled the bases.)

And with a bit of Blu Tack substitute, seven 40mm bases of seven Nurglings. No problem, Dai!

Ultimately I'll be remodelling those bases completely, including various bits of scenery (for example, the base of the old metal Archaon model). It'll be interesting to see how much more stuff I can fit on the bases, given that they're pretty crowded already. 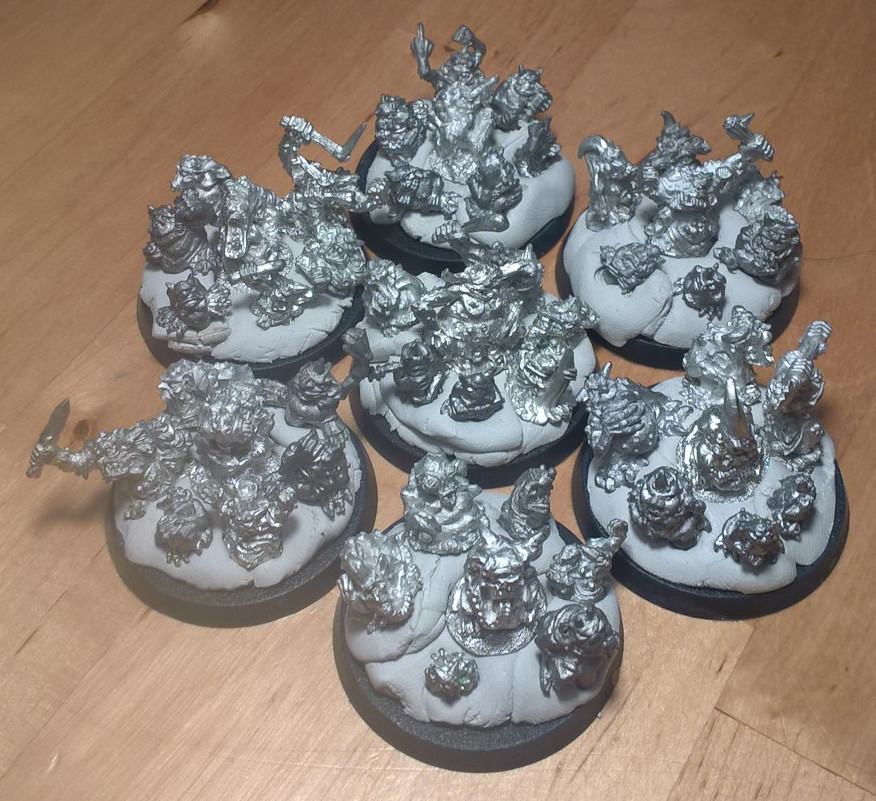 And now I've carefully packed away everything into boxes for play tomorrow. As well as rulebooks, dice, and tape measure, I've also packed some glue, a craft knife, and pliers in case of emergency repair work.

There will be six of us playing tomorrow, expecting to get in two games each. I'll also take my kids (aged 8 and 6) to act as my military advisors and dice rollers. I'm hoping tomorrow morning to pack up a few Tyranids and Harlequins so that they can do a little skirmishing themselves as well.
Top

Wow. Every time you post in here I feel a liiiittle bit more guilty.
One rule to rule them all:

Great progress Stelio!
I bashed a couple of PBs together myself, for an upcoming painting event.
If you need some left over parts or any other replacements, just gimme a quick PM I could assist you with parts.

You are right the kit is great and comes together easily, but those arms are very fiddly and thin.
>> Text goes 'ere <<
Top

minamoto wrote: ↑
Mon Mar 05, 2018 5:16 pm
If you need some left over parts or any other replacements, just gimme a quick PM I could assist you with parts.

Very kind of you to offer there, but I'm constrained by my own rule (as far as possible) to not use the same component twice, in order to ensure that the army looks individual and characterful throughout. (The major exception is the ubiquitous Rhino chassis, but when I get to those I'll be modelling them in different ways so that they hopefully all look unique.)

So, I'm back at the modelling thread. That probably means I've been doing more modelling (and not just with the aim of making Phil feel more guilty

It was decided after last weekend's gaming that we would meet again at some unspecified point, and that we'd only field 1000 point armies, in order to make the battles faster and get more individual games in. Before that day comes, I've got some tidying up to do. Outstanding bits are: But not all of that needs doing, because not all of these will be in the 1000 point force.

Today I started on the Great Unclean One. The 1st release model is practically unworkable as an 8th edition GUO now: it's too small and it's got no weapons. While I can convert it to fix the latter point, the former is more damning. Frankly, it's the size of a Herald, and is smaller even than a Daemon Prince. So my latest thinking is to chop the model up and use it to decorate a vehicle, having the upper half of the model coming out of the top of the Predator's turret, perhaps. Heresy to treat a revered ancient model this way, or useful repurposing? I await your condemnation or commendation.

I'd already partially built the 2nd release GUO before today. Here are the components as of this morning: 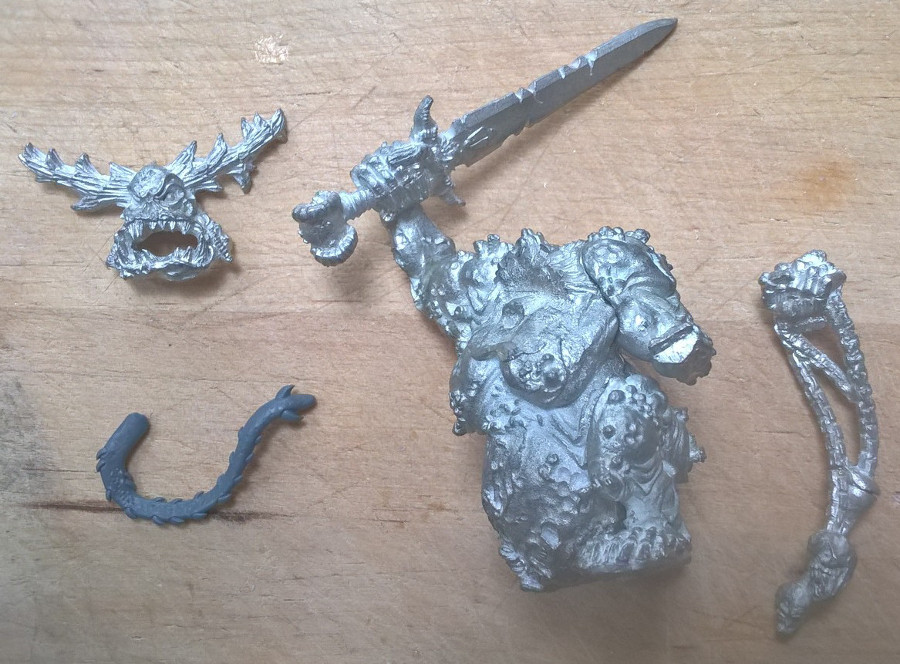 That plastic tongue is a spare from the Beast of Nurgle sprue, the larger of the two tongues that it comes with. (The smaller will be used on the Mabrothrax-to-Spoilpox-Scrivener conversion.) It's a far better tongue than the one the 1996 GUO comes with, fills the mouth better, and fits around the body and arm perfectly; very pleasing.

I've also double-pinned it to a resin base, so that it's totally sturdy (important for such a large lump of metal).

I'd have liked to pin the tongue for strength, but I just used a big ball of glue instead. Being plastic, the tongue is the weakest part of the model. Hopefully it won't get knocked off at any point; I'll have to pack it carefully for gaming. 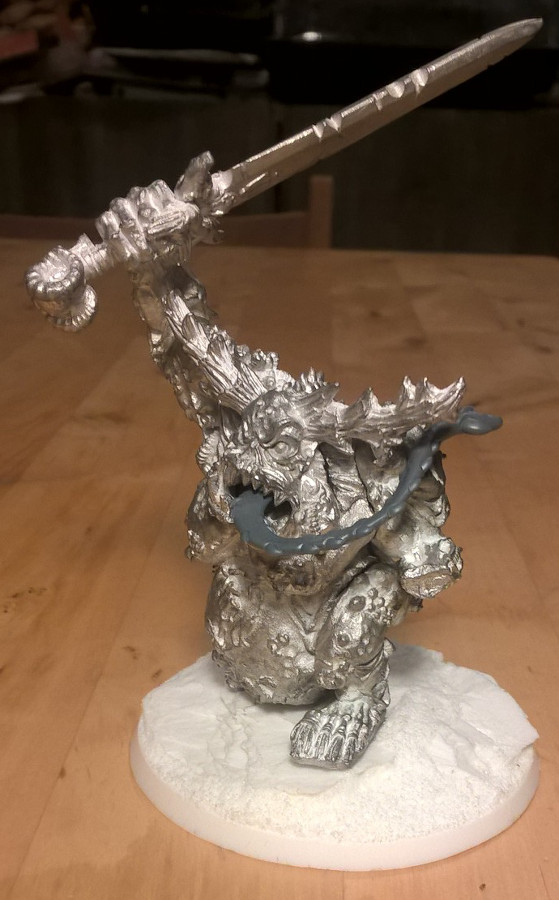 I needed to fit it to the base before attaching the flail-carrying arm, so that the flail rests correctly against the base (rather than dangling incongruously some distance above the base).

I also need to, for the first time, crack open the green stuff. There are some joins in the two-part flail that need filling. I also need to put in a little extra bit of ground under the feet just to tidy it up and make a model designed to go on a flat base work well on an uneven-surfaced textured base. Should be an interesting first foray into the world of sculpting.

I have a question for you too: what do you do with the lines where components of a model meet? Do you use a bit of green stuff or liquid green stuff as a filler, or do you find that the join isn't visible after painting? I'd rather get the modelling correct before priming, but lack the experience on the best approach.
Top

As for the join lines....I struggle with these too. They show up when you paint them unless you fill them first but how you do that is up to you. With the liquid GS it might take one or two fills to cover up neatly (or three if like me you suck at using it) and with regular GS you might get away with just one but it isn't as easy to use.

Or you could just ignore the gaps?
One rule to rule them all:

With phill on the gaps. I normally use liquid green stuff if I have it otherwise just regular green stuff but it is indeed a pain i* t** a** to use.
As far as the 1st edition great unclean one , It would be a shame indeed to see it chopped up but if you've got no other use for it and it if it can make a rhino look all the better and more appropriate to the theme of the army then why not to?
The plastic tongue in the 2nd edition great unclean one looks fantastic even better than the stupid cartoony not snake tongue that it came with.
Keep up the good work mate!
Arse! Feck! Drink! Girls!
Top

Last night I had a bit of fun by cracking open the plastic Daemon Prince model and putting it together: 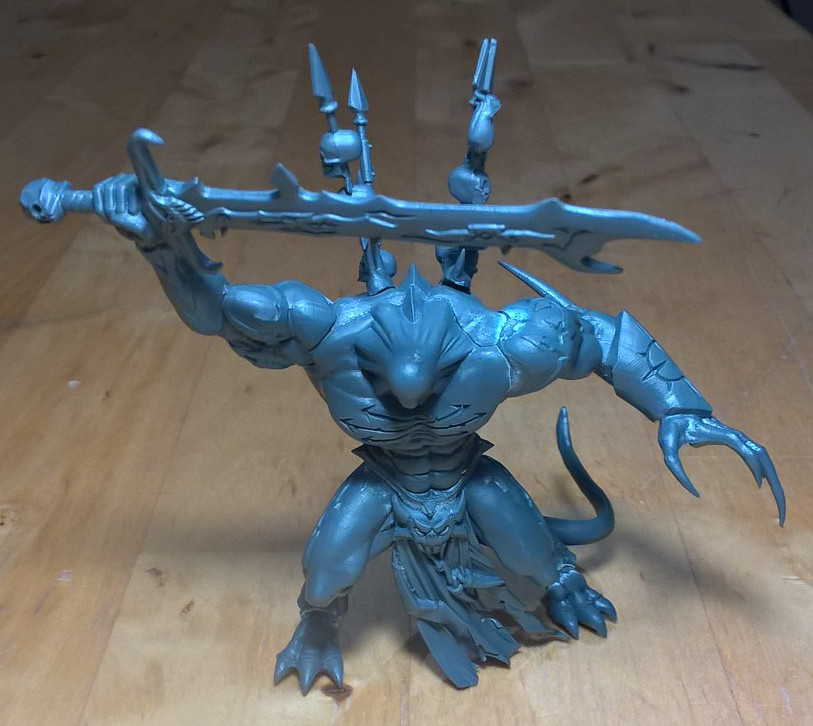 It's a kit with quite a few fun components. Some of the spare bits are perfect for adding to my metal Death Guard Daemon Prince. In particular, the other tabard will make a great cloak, fitting just perfectly between his two should pads at the back. I'm also adding the thigh armour to him, as pictured below (he's held in a vice to keep the angle just right while the glue sets). Note also the addition of a plastic pendant, which came from the new Beast of Nurgle sprue. Nice!

I'm currently thinking of fully assembling, including shoulder pads and head, before painting (rather than painting components separately before a final assembly). 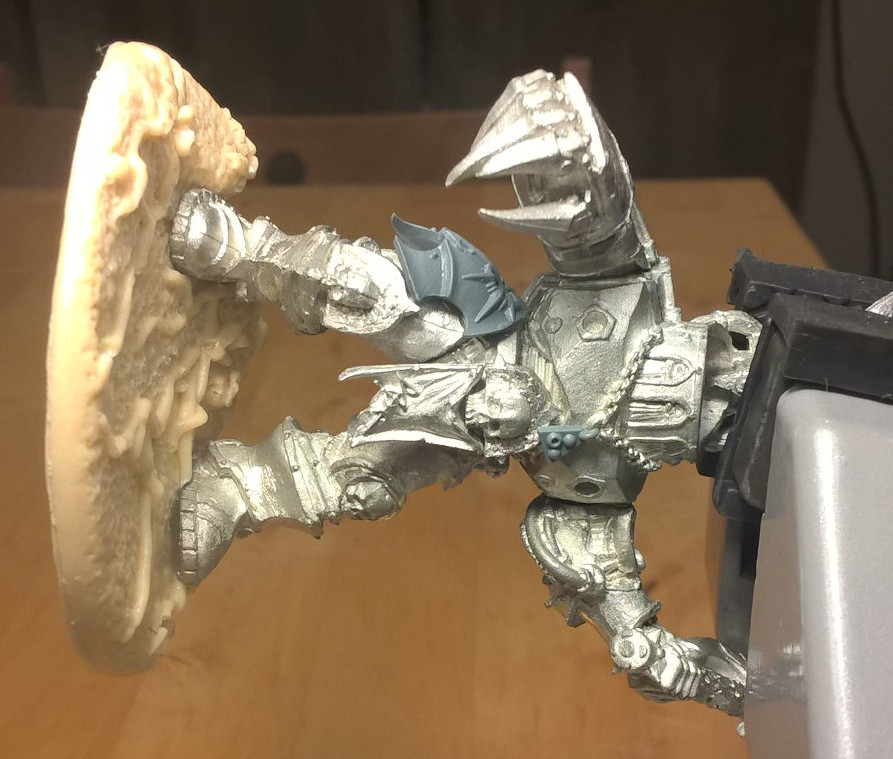 I had a look on YouTube for some tutorials on using liquid green stuff (LGS). The official Games Workshop video goes over how to use it to fill gaps, but notes that it shrinks when it dries so you'll need to use more than one layer. A review from MrWatchingpaintdry notes disappointment with the shrinking. Some other videos further malign LGS. An alternative video from Tabletop Minions agrees with the shrinkage and notes that this makes it unsuitable for its intended use as a gap filler, but instead gives great tips on using LGS to create surface textures. Dr.Zapps says to apply it with a sculpting tool and without watering it down; but there was over 20 minutes of video there and it had buffering problems so I didn't watch it all.

So what to use for gap filling if not LGS? Well, Lukes Aps gives a super tip, using cyanoacrylate combined with sodium bicarbonate to form an instant plastic filler. Magic! I might give that a go instead.
Top

I’d recommend using green stuff to fill the gaps. A trick I learned a while back is to use KY Jelly as a lubricant. It will stay on the tools longer than spit or water and isn’t as hard to clean off as Vaseline.
I’ve used Aves Apoxie Scupt to really good effect because it’s water soluble so you can water it down to a slurry if needed and “erase” it in spots before it cures. But I don’t know how available it is in England. It’s good stuff but takes different techniques to use than GS even if they are both epoxy resins. It’s WAY cheaper than GS over here if you buy it in bulk.
Top
Post Reply [phpBB Debug] PHP Warning: in file [ROOT]/vendor/twig/twig/lib/Twig/Extension/Core.php on line 1266: count(): Parameter must be an array or an object that implements Countable

Users browsing this forum: No registered users and 0 guests