Talk about gameplay, army lists, formations, units and single models in your favorite games.
Forum rules
Post Reply [phpBB Debug] PHP Warning: in file [ROOT]/vendor/twig/twig/lib/Twig/Extension/Core.php on line 1266: count(): Parameter must be an array or an object that implements Countable

4 posts [phpBB Debug] PHP Warning: in file [ROOT]/vendor/twig/twig/lib/Twig/Extension/Core.php on line 1266: count(): Parameter must be an array or an object that implements Countable
• Page 1 of 1 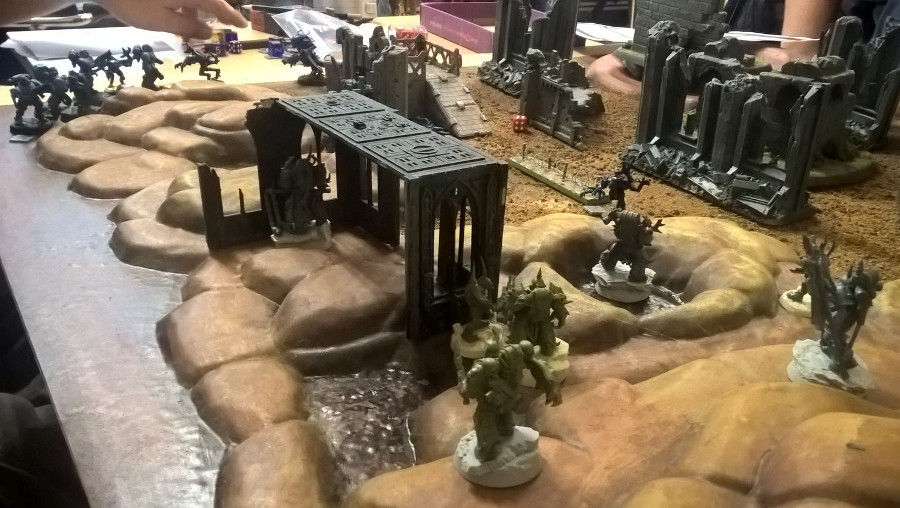 There were seven of us playing, so we randomly split into two games of Warhammer 40,000 and a three-way game of Kill Team. I was in the latter, facing Tyranids and Space Wolves, and we used the "Sweep and Clear" mission. Tyranids deployed first and Death Guard second, so of course I placed myself at the furthest corner from the close combat monsters. In retrospect it was this deployment that lost me first place, as I overestimated the lethality of the aliens. In practice, it turned out that the Tyranid Warriors with deathspitters and Genestealers lacked good enough AP to consistently damage Marines. This meant that the loyalist Space Marines were able to take down most of them, with the Death Guard clearing the rest, before we lay into each other. Ultimately the loyalists won on victory points having taken down more bugs than me, before we ran out of game rounds. 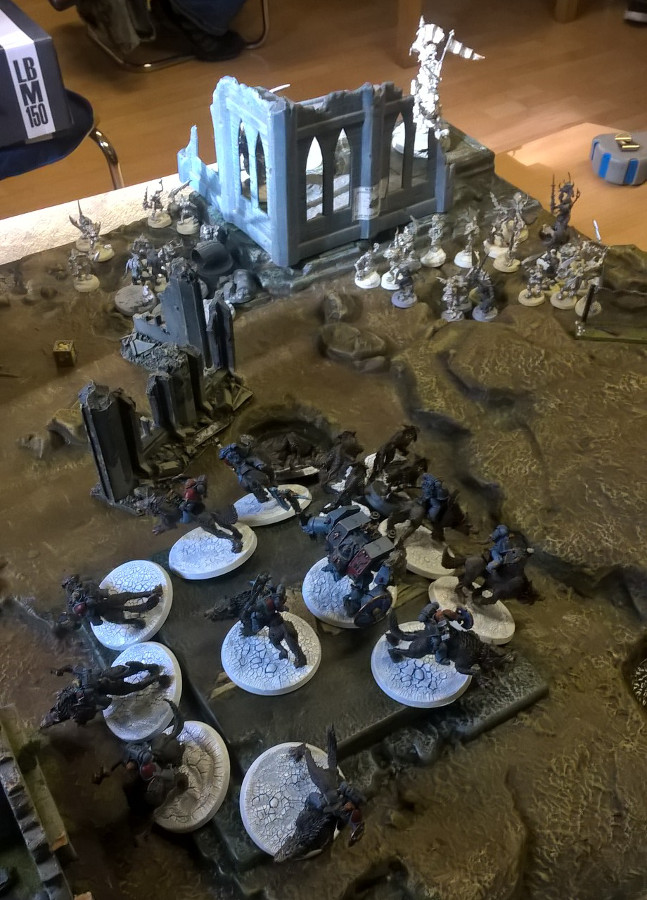 Then it was Warhammer 40,000 for me in the afternoon, paired against Space Wolves. We used the Open War cards and got a "kill the courier" mission (where one designated non-warlord model on each side is a courier, and you win by killing the opposing courier), a deployment of one team in a central circle and the other coming in from all corners (we assigned positions randomly), and a random twist that adds to psychic powers but makes perils of the warp worse.

I was using the army list as posted above. The Space Wolf army was interesting in that it consisted of: a mounted Wolf Lord, a three packs of three Thunderwolf Cavalry, five Fenrisian Wolves, and a Venerable Dreadnought (disappointingly not riding a wolf). So a very fast, manoeuvrable force, and totally close combat focussed (the Wolf Lord had the only ranged weapon: a pistol).

The Space Wolves formed up in the middle, with a protective ring around their obvious courier: the Dreadnought. I chose Epidemius to be my courier because he's survivable, but also because his role (for me) is always to sit at the back of the army and buff everyone by counting unit kills. I was worried that the fast Space Wolves would outmanoeuvre me, so I pushed everything on in the same corner so that there was no way of the marines skirting my troops to get to their prize.

As I moved forward to join close combat, I held back the Plague Drones in reserve on a building top, ready to engage anyone that might slip past, and held the Great Unclean One back on one side and the Spoilpox Scrivener on the other to do the same. Meanwhile the Plaguebearers and Nurglings stopped the Space Wolves from moving, with the Poxbringer joining in and buffing.

I took heavy casualties obviously, but I was also wearing down the Space Wolves, and ultimately brought the remainder of my units (except Epidemius) in for the kill as the Dreadnought got exposed. Once the Greater Daemon got stuck in and it was clear that he was going to pummel anything he got close to, some of the Space Wolves made a mad dash for Epidemius at the end in a desperate bid to take him down first. But I killed the Dreadnought before they could reach the Tallyman. Victory for Grandfather Nurgle! 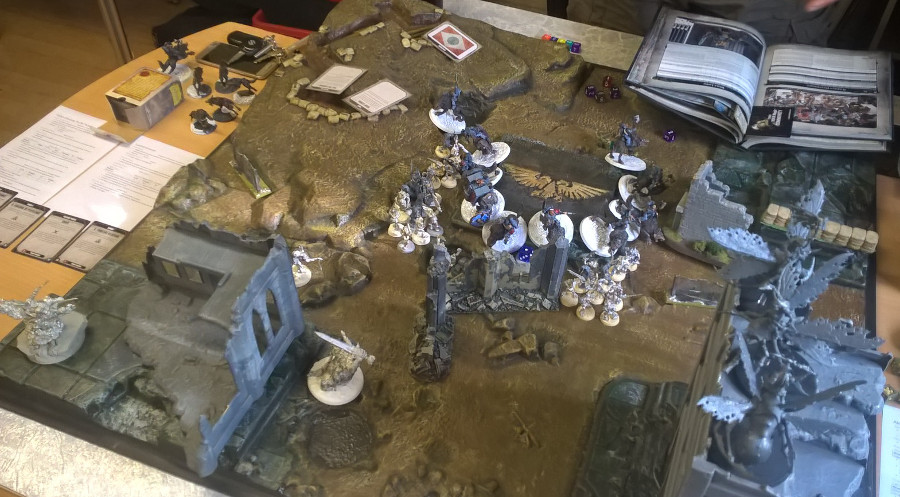 Overall a good list. Keeping the characters close to the troops worked well for buffing them, and as they got worn down and started losing those buffs then the buffs from Epidemius stepped up the fill the gap. This game was more confirmation for me that the key to victory on the day is placement and movement. I am pleased with how it went.
Top

Wow, this was a fun read and great to get some ideas on tactics for when me and a mate get to play some in the future, though he plays Imperial Fist Primaris, so not quite as maneuverable, but I think the general premise will apply. Thanks for sharing!
Arse! Feck! Drink! Girls!
Top

So what kind of speed would a wolf riding dreadnought be capable of?

4 posts [phpBB Debug] PHP Warning: in file [ROOT]/vendor/twig/twig/lib/Twig/Extension/Core.php on line 1266: count(): Parameter must be an array or an object that implements Countable
• Page 1 of 1

Users browsing this forum: No registered users and 3 guests